From El Paso to Big Bend 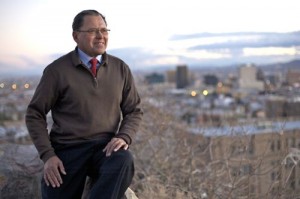 Included in this sprawling desert district are the City of El Paso and numerous other  communities such as Anthony, Horizon City, Socorro, and Vinton, as well as the Census Population Places of Agua Dulce, Butterfield, Canutillo, Fort Bliss, Homestead Meadows North and South, Prado Verde, Sparks, Vinton, and Westway.

The district is one of the largest in the Texas Senate, and encompasses the sixth-largest city in Texas, multiple international crossings, Trans-Pecos ranchland, historic Texas towns, an internationally known arts center, and a portion of the incredible Big Bend State Park.

The population center of the district is El Paso County and its seat, the city of El Paso, which, with its sister city, Ciudad Juarez, Mexico, combine to form the largest international border community in the world. With downtown areas that are within walking distance of one another, El Paso and Juarez are distinctly urban. Yet, the city, which spreads out over 248 square miles and is divided by the rugged Franklin Mountains into the East Side and the West Side, is a diverse landscape of mountain, business districts, architecturally-rich neighborhoods, parks, museums, farmland, universities and colleges, one of the nation’s oldest military installations, Fort Bliss, and major refining operations. The city is a major transportation hub: Interstate 10 and the railroads combine to make the city a central link in east-west commerce for the nation, and north-south commerce for North America. 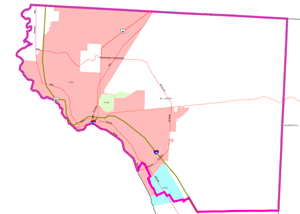 The city is distinctly cosmopolitan; seven in ten El Pasoans are bilingual in English and Spanish. Marked by history like few others, in 1981, El Paso marked four centennials – the 400th anniversary of the arrival of the first Spaniards; the 300th anniversary of the founding of the Ysleta and Socorro missions; the 200th of the order establishing the presidio of San Elizario in its present Texas location; and the 100th of the coming of the railroads.

Of course, before all this, native indigenous people lived throughout this rich river valley. El Paso’s history as a meeting place, as a place of collision between cultures, and as the “Ellis Island of the South,” where hundreds of thousands of immigrants from all ethnic backgrounds have made their way into the U.S., lends it a distinct cultural air and a profound cultural heritage. The city is rich in historical treasures, like the Spanish missions that dot the Lower Valley, and cultural jewels, like the fully-restored Plaza Theatre.

The major businesses in El Paso include military, educational, retail and wholesale as well as manufacturing, especially apparel and boots and the ever-important chile, pecan and cotton industries.

El Paso is the home of the Sun Bowl football game, played each college bowl season at the University of Texas at El Paso. Other major teams include the Patriots, a professional soccer franchise; the El Paso Buzzards professional ice hockey team; and the El Paso Diablos, a professional baseball team that plays in Cohen Stadium.

The city boasts the country’s newest medical school, in addition to the University of Texas at El Paso, and El Paso Community College (the fastest growing community college in the State of Texas and the largest grantor of associate degrees to Hispanic students in the nation). Other academic institutions include Howard Payne University, Webster University, and the Texas Tech University Health Sciences Center at El Paso. Three fast-growing school districts provide 22 high schools, 33 middle/junior high schools, and 101 elementary schools. This is augmented by more than 25 parochial schools and 50 private schools.

El Paso is the health care center for much of the Southwest and Mexico. The city’s health care facilities include five private hospitals, the public hospital, University Medical Center, and the William Beaumont Army Medical Center.

No description of District 29 is complete without the inclusion of Fort Bliss, which contributes over $1 billion annually to the regional economy. Fort Bliss is the home of the Air Defense Artillery Center of Excellence. With 1.1 million acres, this post is bigger than the state of Rhode Island and can accommodate every weapon system in the Army. Excellent ranges and training area, coupled with the third longest runway in the nation, make Fort Bliss a premiere facility for training, mobilization and deploying combat forces.

As dynamic as the city and region are, challenges abound. Caught, like other border cities, in the narcotics trade-related turf battles, Ciudad Juarez is reeling from violence in its streets. Thousands, if not more, families are relocating to El Paso to escape its reaches. El Paso, too, struggles with chronic under-employment, too-high high-school drop-out rates, and an economy undergoing a difficult transition to the competition that characterizes the global market. While the city offers an attractive cost-of-living, this is gained too often by labor practices that don’t provide living wages to its employees. The city is currently experiencing a population boom driven in part by the expansion of Fort Bliss, the mass in-migration of Juarez families, and high birth rates. While new inflows will enter the economy, these forces are also expected to stress the city’s education, housing, public health and other social service systems for years to come. Challenges remaining in securing the border while protecting civil rights, and in linking young people to new opportunities in solar and other environmentally-friendly technologies.

Culberson County had an estimated population of 2,400 as of 2010, down about 20 percent from the previous census. It covers 3,812 square miles. The county seat is Van Horn, which is about 120 miles east of El Paso.

Van Horn first was established in the mid-1800s as part of the San Antonio-El Paso mail route. The settlement solidified in 1881 with the laying of Texas and Pacific railway.

Van Horn is home to the Van Horn High School Eagles and is served by the Culberson County-Allamoore Independent School District.

The major highway is Interstate 10, which runs through town. The Culberson County Airport is about three miles outside of town.

One of the county’s major attractions is Guadalupe Mountains National Park, which includes Texas’ highest peak at 8,751 feet. The park centerpiece is the Capitan Reef, the mountains that until 260 million years ago were under the Delaware Sea, which was part of the Permian Basin. As the sea dried the reef became covered; about 20 million years ago tectonic movements raised a portion of the reef. Wind and rain eroded the softer sediment covering the hard limestone reef, which emerged to form what we see as the Guadalupe Mountains. “Today,” states the national park website, “the reef towers above the desert floor as it once loomed over the floor of the Delaware Sea 260 to 265 million years ago.”

The county is also home to the Blue Origin launch site, which is about 20 miles north of Van Horn off US-54. Blue Origin is a Washington State-based company funded by Amazon found Jeff Brezos, who bought thousands of acres in Culberson County and has been very tight-lipped about the project. The goal of the company is to make space travel accessible by increasing its safety and decreasing its cost.

Formed in 1917, the county was named after El Paso State Sen. Claude Benton Hudspeth. The county seat is Sierra Blanca, a town of more than 500, named for the white poppies that cover its nearby mountains.

The town is served by the Sierra Blanca Independent School District.

Sierra Blanca, like Van Horn, is on the cross-country rail line. The Texas State Historical Association Online describes its formation like this:

The town owes its existence to the competition that surrounded the construction of the nation’s second transcontinental rail link. Collis P. Huntington’s Southern Pacific line began building eastward from the Pacific in 1869, while Jay Gould’s Texas and Pacific Railway began building westward from Central Texas in 1872. By November 25, 1881, the two crews had built to within ten miles of each other, and neither had any intention of yielding to the other. On the next day Huntington and Gould agreed to a compromise, and on December 15 Gould drove a silver spike to join the two roads seven miles southeast of Sierra Blanca Mountain. Transcontinental service began the next day.

The county, population approximately 2,400, was named after Confederate President Jefferson Davis, and is one of the nine counties that make up the Trans-Pecos region of West Texas.

The county seat is Fort Davis, which is a town at the center of numerous area attractions, including parks (Balmorhea State Park and Davis Mountains State Park), an historic fort (Fort Davis National Historic Site), a nature conservancy (Chihuahuan Desert Nature Center & Botanical Gardens), and proximity to Marfa, itself a destination.

The McDonald Observatory, owned by the University of Texas at Austin, is near Fort Davis; the county also contains the 270,000-acre Texas Davis Mountains American Viticultural Area, of which about 50 acres is cultivated.

The population of Marfa is about 2,400 people, about half its altitude above sea level, as locals like to joke.

Marfa is internationally known for the Chinati Foundation, which manages the work of artist Donald Judd. Since his death in 1994 other arts organizations in multiple disciplines have developed and the town has become a destination for world-class art. Among the groups are the Lannan Foundation (literature), Ballroom Marfa (eclectic contemporary culture, including music, visual, and performance arts), the Goode-Crowley Theatre and Marfa Live Arts, and the International Women’s Foundation.

Marfa also is known for a phenomena called the Marfa Lights, an apparition in the sky that still has not been explained.

Some other facts about Presidio County, courtesy of the website Historic Texas, include:

•It is in the Trans-Pecos region of southwest Texas and is named for the ancient border settlement of Presidio del Norte.
•Presidio County is triangular in shape and is bounded on the east by Brewster County, on the north by Jeff Davis County, and on the south and west for 135 miles by the Rio Grande and Mexico.
•Marfa, the county seat, is 190 miles southeast of El Paso and 150 miles southwest of Odessa.